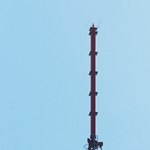 Electronics Research, Inc. provided the new main and auxiliary digital television antennas for WEHT, as well as structural engineering services, tower reinforcement materials, and installation services. The WEHT tower was originally constructed in 1966 and is co-located with WEHT’s studio facilities in Henderson Kentucky. The new antenna required for WEHT’s post transition digital operations on a VHF RF channel was larger and heavier than the channel 25 analog antenna and thus required a complete tower inspection, including ultrasonic inspection of the guy wire anchors, and a tower reinforcement design to support the new digital antennas and handle the erection stresses associated with their installation.

The reinforcement design brought the tower structure into compliance with the ANSI/TIA-222 standard and required the replacement of three (3) guy levels with stronger bridge strand wire. In addition to the new guy wires the reinforcement project also included the fabrication and installation of split pipe reinforcements on most of the tower legs and upgrading the tower cross bracing. The final portion of the makeover was the replacement of the top 30-foot section of the tower with a brand new tower section that included a mounting flange for the new ERI TRASAR television antenna.

The new top mounted antenna is an ERI model ATW9V3-CTO-7 TRASAR, circularly polarized, coaxial slotted array antenna. The antenna was designed and fabricated at ERI’s manufacturing facility in Chandler, Indiana, approximately 20 miles from WEHT’s studio and tower complex. In addition to the top mounted main antenna, ERI supplied and installed a side mounted standby antenna which was used to maintain over the air broadcasts immediately following the June 12 transition date while the tower reinforcement project was underway.

WEHT was Evansville’s first television station, signing on in 1953, on Channel 50. Gilmore Broadcasting acquired the station in 1964 and moved it to Channel 25. WEHT has been Evansville’s ABC affiliate since 1995. Shortly after initiating its post transition digital transmissions WEHT activated a second digital channel as an affiliate of the Retro Television Network, branded as RTV 25 on digital channel 25.2. In addition, to RTV’s network programming WEHT also produces a 9:00 PM edition of its local news program, NEWS25.

Located in downtown Minneapolis the communication towers on top of the IDS Center, 910-feet (277-meters), are the highest point in the State of Minnesota. ERI provided a 12-Bay AXIOM Master FM Antenna which serves as a combiner auxiliary FM antenna system for a number of major FM radio stations who formerly broadcast from this as their main transmitter site. They now use the IDS as a backup in case their primary location in Shoreview, Minnesota were to fail or when shut down for maintenance. The AXIOM Master FM Antenna is a broadband side mounted antenna that can be configured to handle a combined power levels up to 240 kilowatts. The communication spires on top of the building tower to 910 feet (277.3 m), making them the highest point in Minneapolis. The top of the IDS is also used for microwave transmission and reception by WCCO-TV, KSTP-TV, KMSP-TV, and KARE news trucks, in order to relay video to their stations.

ABC affiliate KTUL in Tulsa, Oklahoma faced a problem with their post-digital-transition coverage significant enough to affect the station’s ratings. Their side mounted channel 8 antenna was not performing as well as their pre-transition antenna. KTUL needed to act quickly before their revenues began to suffer

To resolve this problem, KTUL decided to purchase a new, top-mounted antenna installed at a higher elevation to provide a better pattern. To further improve coverage, KTUL would add vertical polarization to achieve circular polarization. Purchasing and installing a top-mount VHF antenna is no trivial endeavor. Few broadcast equipment companies had the capabilities required to design and manufacture a 70 foot long antenna to be installed atop an 1800 ft tower.

KTUL selected Electronics Research, Inc., headquartered in Chandler, Indiana. ERI would provide a complete turn-key solution on a very tight timeline. The delivery of the 70 foot long, 19,000 lb TRASAR® VHF television antenna was set for April 20, 2010, giving ERI only fifteen weeks to design, manufacture, and ship an antenna that would normally take more than twenty weeks.

ERI shipped the antenna on time, meeting the strict deadline laid out in the agreement with KTUL. Now that the antenna was on site, the final obstacle to overcome was installing the antenna on top of the tower. With the antenna weighing over nine and a half tons and measuring almost two school busses end to end, installation on a tower over a third of a mile high presented many challenges. After eight days of rigging, the installation crew had hoisted and mounted the antenna, making it ready for broadcast.

On April 27, 2010 at 3:09 PM (CDT), KTUL began broadcasting from its new ERI TRASAR® topmounted VHF TV Antenna. Since then, KTUL’s ratings have improved and returning Channel 8 in Tulsa, Oklahoma to normal operations.